It’s kinda cool to live in a place where I don’t have to travel far at all to have no idea what is for sale in my grocery store. 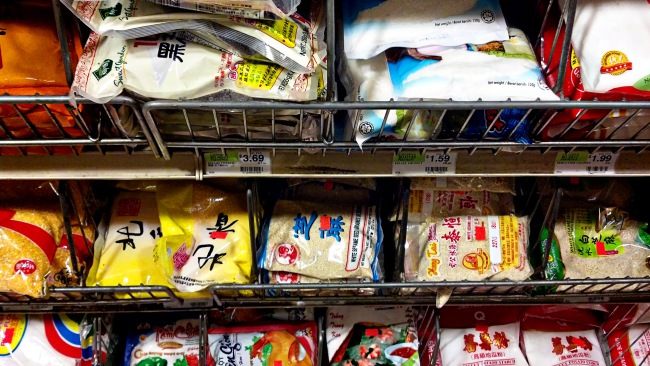 It’s also kind of cool to find a place in your city that you’ve been before but had no idea how to find again.  This place was an especially interesting find as I visited this place in 2009 with my youth group.  It was my second time in the city then and we were on a mission trip.  And sometimes, especially when I’m in Queens, I feel like I’m near this place.  So finally, randomly, running into it (in Queens no less) was like running into myself, before I knew the continuum of my life that would lead to living here and visiting this place.  Where I would be- not to pass out tracks- but to take 2 exams for my New York state teaching license. 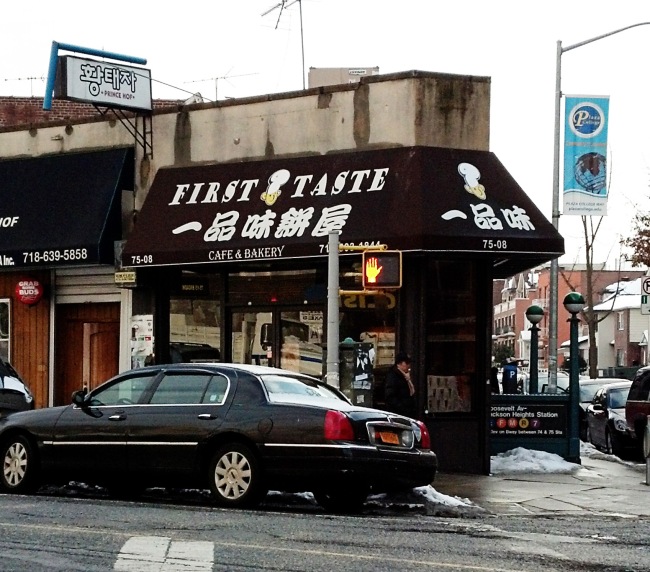 I also think it’s cool that the snow is melting.  One of my favorite things about spring (which isn’t here yet but is taunting us from afar) is how the city comes alive as the temperatures rise.  People are happier.  And there are more performing artists and less bums on the train.  There are tourists who are lost.  And we can eat ice cream without being cold.  I mean, what’s not to love?

And do you know what else I think is cool?  The power of people + comedy to melt the heart and make life just a little more bearable.

See what I mean?

Guess what guys?  Next week is March.  😀

We are 2 weeks into February and life has been pretty gray.  All the pictures on my phone include snow and gray skies.  And everyday I have spent either thinking about or doing school.  I’m slowly finding myself and where I belong at my new internship.  I’m part of a study group that meets every Saturday to study for comps (which are on February 28th- leaving only one last Saturday study session).  But.  Since we are less than 2 weeks from comps our study sessions are being upped to 3 times a week. (Gag)

But on the plus side.  I passed the PRAXIS!  Which is my state licensing exam.  Which is amazing. Amazing that I’m here.  At this point in my program.  2 weeks from finishing the insanity that is the journey to licensing.  84 days to graduation.  85 days to summer vacation.  85 days from no longer marking ‘student’ as my career.  I’d have to say.  Studying for all these tests is a bit like reminiscing.  Except what I’m reminiscing is facts, sources, and theories- which aren’t near as sweet as memories.  But there is a light at the end of the tunnel.  And I am walking towards that light!

And I’m ready for spring.  In the mean time, here are some pictures of snow:

1. Snow and the view from my newest place of internshipment. 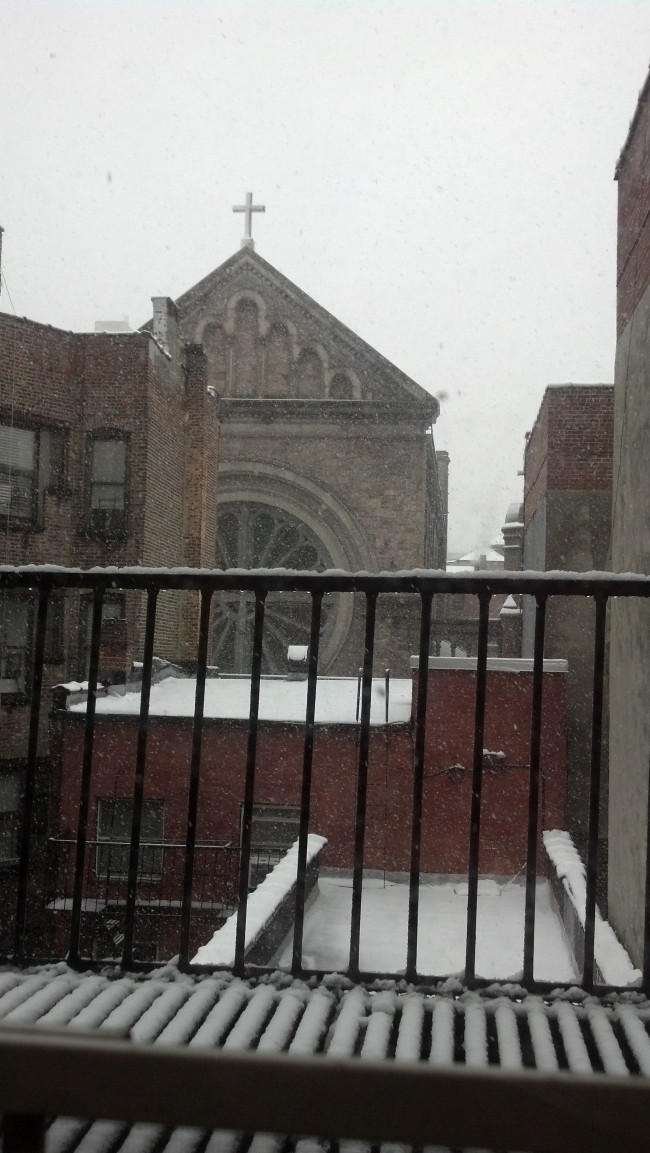 2. snow along my walk to my internship. 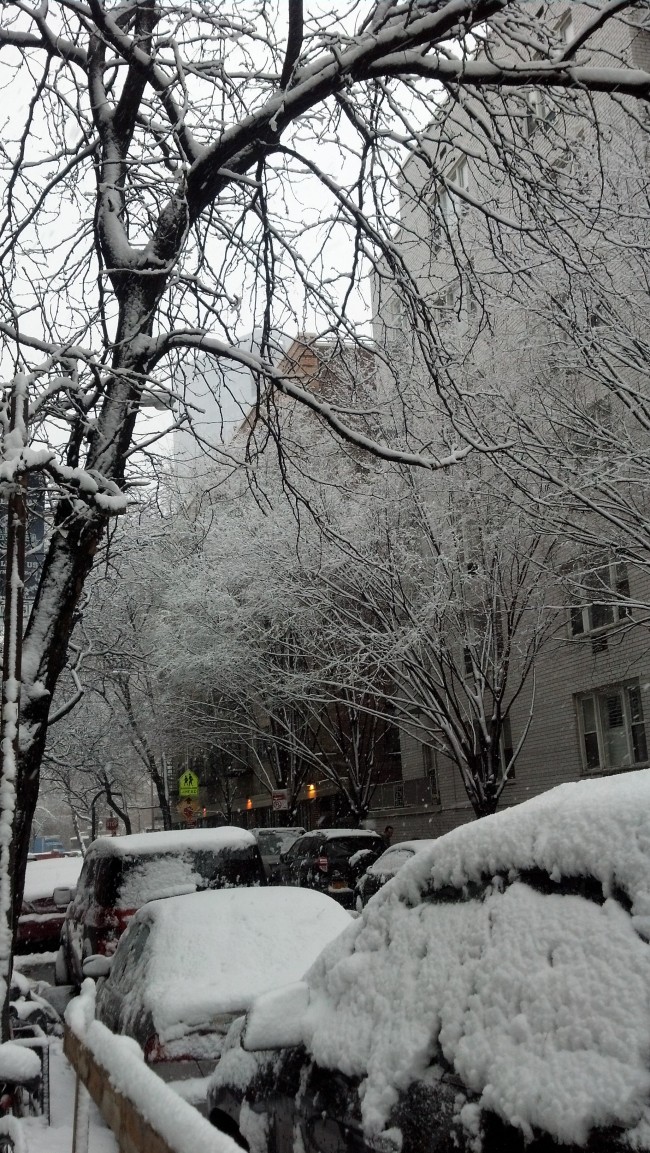 3. snow on my walk to the train from my apartment. Pity the people who attempt to keep their sidewalk clean.  Pity and appreciation all at once. 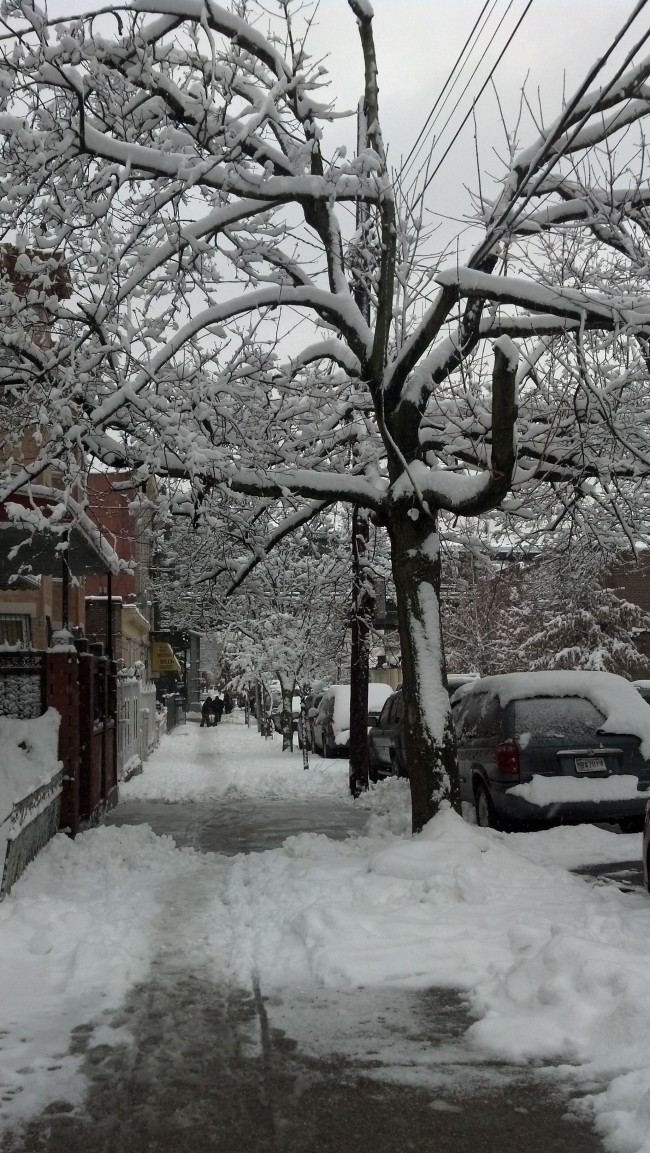 4. snow on campus the one day I was out and thought “how is this safe??” as I slid my way to campus. 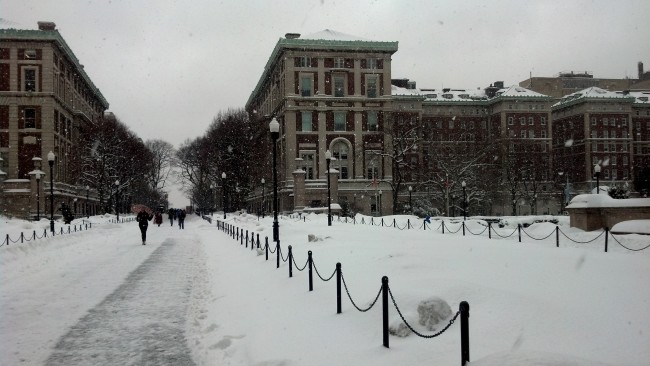 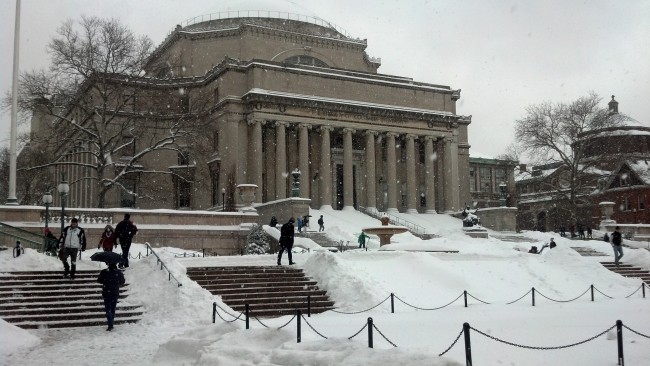 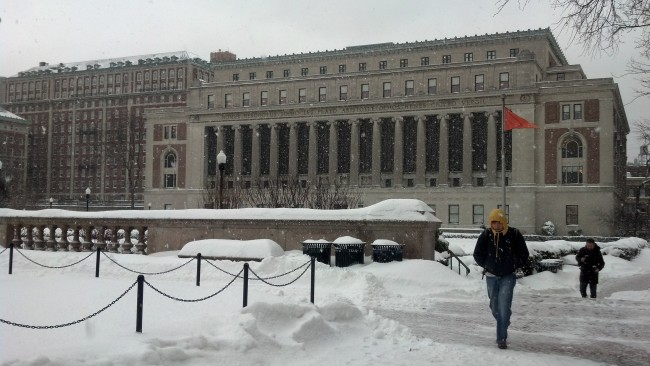 5. snow and a diagram of love as a subway map on Valentine’s day in Brooklyn. 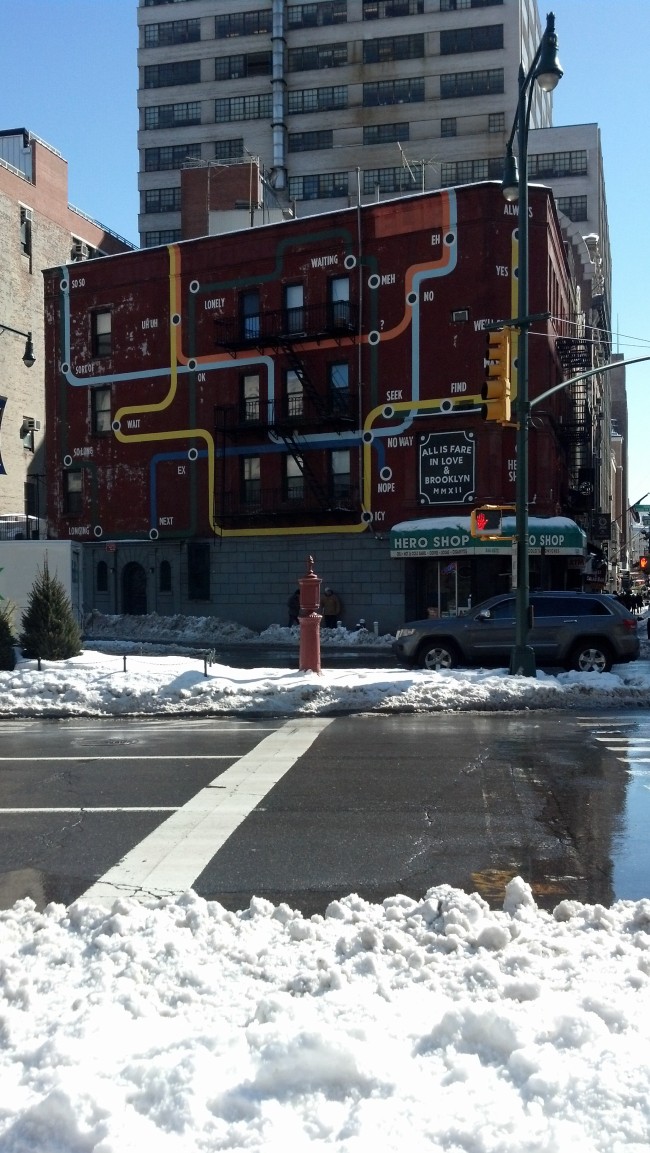 6. me in my snow gear 1 hour post-PRAXIS passing and waiting for the train. 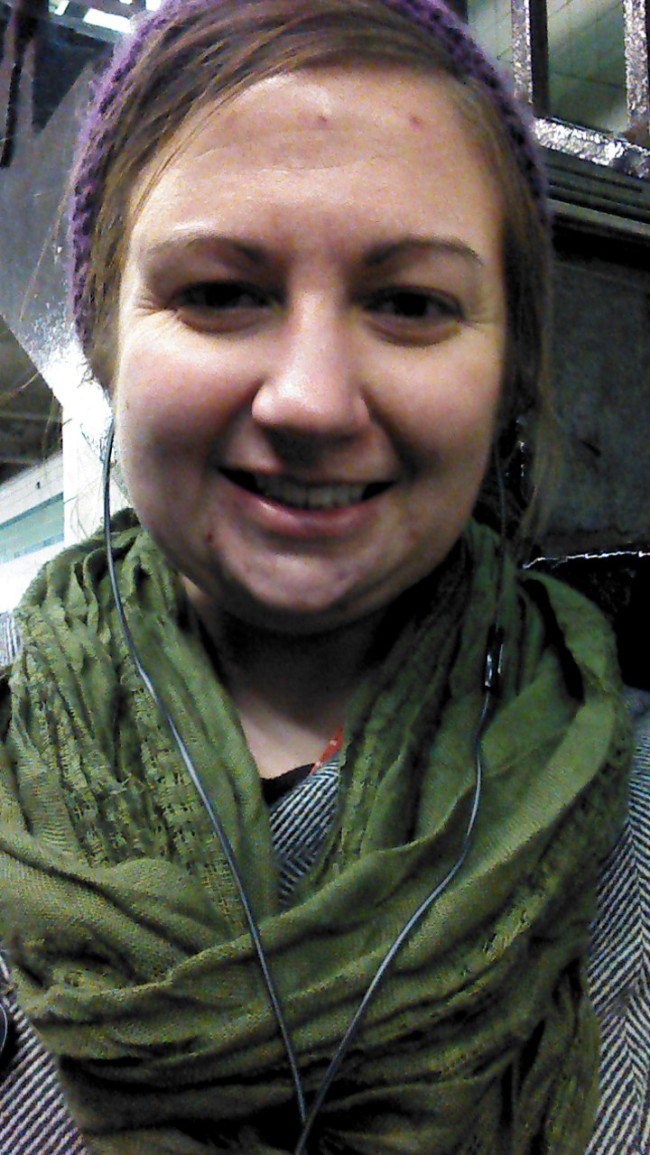 7. and finally- me when I think about my upcoming 5 hour essay exam that is required for graduation.

On that note.  Happy mid-February everyone.  We shall make it through this winter- I promise. (errr. I hope.)

Well.  I’m back in New York, facing my last semester in grad school.  Making a new routine that comes with a new class/internship schedule.  And having my share of amusing experiences.

One of which is the fact that I now spend 3 days a week in high school.  For my internship.

My new high school is for kids with special needs.  All the kids at my school ‘perform academically’ between 1st and 4th grade.  They all speak.  And they are all hilarious.  Mostly.

In high school I am working more as a teacher than a traditional “SLP” as my kids aren’t seen one-on-one but rather in groups.  And they come to these groups when the bell rings.  As a class period.  Which is great b/c that means they aren’t missing another class to come to speech (which often happens).  However, since it is a class, it has a curriculum rather than individualized speech goals.  If you are keeping up with this paragraph – awesome. I know. It has a lot of school jargon in it.

Okay.  So now you know about my school.  Oh. Except- don’t forget.  All my kids are teenagers.  Fashionista girls.  Ginormous high school boys.  (By ginormous I mean 6 feet.  It seems like a large percentage of my students are taller than me.  Somehow that is funny to me.) With learning disabilities.  With Attitudes.  Hormones.  And a love for Disney movies.  I think I will like them a lot.

My main challenge so far has been teaching my name.  Ms. Zimmerman.  I’ve never been Ms. Zimmerman before.  I’ve been Miss Camille.  I’ve been Camille.  But Ms. Zimmerman.  Weird.  So.  I have my own identity issues about that.  But then.  Most of my kids have a hard time saying my name.  Probably b/c I have a hard time saying my name. (Mostly b/c the “s” in “Ms.”  co-articulates the the “z” and comes out “Msssimmerman.”  And the stress in “Zimmerman” is on the first vowel.  Causing the final 2 vowels to be reduced to ‘uh’s instead of “er” and “a.”  Which makes me sound like I’m mumbling.)  This ridiculous situation lead me to introduce myself as Mz. Zimmerman (eliminating the “cinnamon” sounding similarities.)  But then one student called me Ms. Zipperman. Yes.  both “m” and “p” are made with closed lips and look the same.  I tried to correct him.  Then I gave up.  Then he introduced me to his teachers.  I corrected him again.  It’s one thing for one student to call me Ms. Zipperman on accident.  It’s another to be called that all the time.

Another fun thing going on at my school is practicing for the talent show.  Dancing to “That’s What Makes You Beautiful.”  Singing to “Under the Sea” from the Little Mermaid.  And of course.  Everyone is preparing for the spring play, The Wizard of Oz.

I also like my school because it is in “the village.”  The village is a neighborhood in Manhattan between Midtown and Lower Manhattan.  And it is pretty cool.  Not only does my street have a great view of the Empire State Building.  But we have parks and restaurants and adventure inspiring places all around us.  If you came to visit- I think we would go to the village.  It’s a neighborhood I don’t know well but wish I did.

So yup.  That was my first week in high school.  I’ll keep you posted on how it goes.

In other news.  It’s 54 degrees here today.  Which is great for Super Bowl fans and players.  And for everyone in New York who is tired of winter.  Like me.

And in ever more news.  We have officially entered February.  Which you may or may not know- is the month I have somehow scheduled the entirety of my licensing/graduating tests.  The Praxis.  A training workshop. 2 tests for my teaching license (which I need to work as an SLP in a school).  And.  My comps.  The comps are on February 28th and will be my hardest and longest test.  We are talking a 5 hour essay test here.  And I have a whole month to study.  While also at my placement and doing homework for class.  So I’m starting now.  Goodbye world.  Hello study sessionsssssss.

On the plus side.  If I survive this month, graduation is pretty much in the bag.